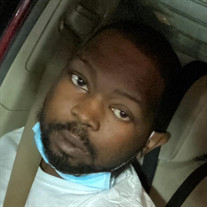 Michael Christopher Washington, “Chris”, was born June 18, 1987, in Greenville, Mississippi to Zonnia Washington and Michael Williams. He was their middle child and oldest son. His early childhood years were spent between Greenville and Dallas, Texas. The family eventually moved to what would become his home state of North Carolina, most notably the cities of Fayetteville and Gastonia. He graduated from Westover High School in 2005 and was a current student at Gaston College double majoring as a welder and electrician. Sadly, on the evening of February 10, 2022, Chris was found passed away in his home. Chris was preceded in death by his mother, Zonnia. He leaves nothing but amazing memories behind for his closest loved ones: Father Michael; Godparents Harold & Belinda Lawson, Sisters Michelle Wade, Tiara Washington, and Tabitha Lawson; Brothers DeMarcus Washington, James Goode, Joc Gordon, and Koveon & Kalen Lawson; Nieces Laila and Anijah Washington; Nephews Devon, DaQuan, & Christian Wade, and Marcellus Washington; Aunts Zana & Sandra Washington and Jacqueline Hobbs; Uncle Eddie Sanders and others. One of the realest people to walk this Earth, Chris was a man of few words. Charming, straightforward, honest, and loyal without a doubt, Chris handled whatever life threw at him like a King. He never let anyone see him down while persevering through life with that huge smile of his. Full of wisdom and laughter, Chris was a simple man and simply wanted to enjoy the life he was given. He didn't have many friends because he considered everyone in his circle family. He promoted what and who he believed in and was always "about the kids". Simply put, Chris amplified love to those that loved him. Chris, you are loved and will be missed.

Michael Christopher Washington, &#8220;Chris&#8221;, was born June 18, 1987, in Greenville, Mississippi to Zonnia Washington and Michael Williams. He was their middle child and oldest son. His early childhood years were spent between Greenville... View Obituary & Service Information

The family of Mr. MIchael Christopher Washington created this Life Tributes page to make it easy to share your memories.

Send flowers to the Washington family.